Four our diving trips we are using three boats that I bought on a small island in the Madura archipelago. It’s traditional fishing boats, long and lean. Built to catch fish in any weather conditions. We are using these traditional boats in order to experience our trips slowly without hurry. No speedboat races to get to your divespots and no hectic assembling of gear while the boat is still running. All hulls are covered with fibreglass to protect the timber. And all 3 boats have a second backup machine (Chinese “Dompeng” Diesel engines) to avoid waiting times due to mechanical issues. 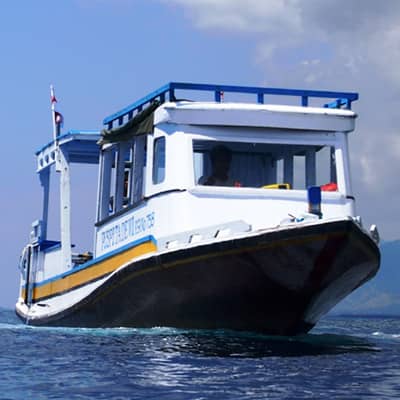 Dewi is my first boat and a long love story. Finding her on the remote island “pulau tengah” – next to Raas in the Madura archipelago was an adventure that I will write a novel about one day. This boat is 16m long and has a cabin, a toilet and a sundeck. Dewi takes us on the daytrips to Menjangan island with a 120 HP inboard engine. 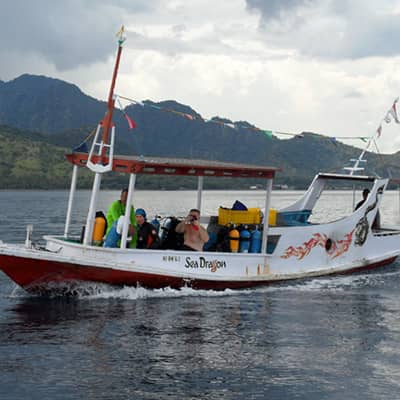 was sold by the man who built it when it was still brandnew. The owner had a sudden vocation to leave for Mecca and become a Haji. And a divecenter paid more than a fisherman would have. Haji Mohammed is the younger brother of the carpenter who built Puspita Dewi. The brothers made me a celebrity on their island among the less than 200 inhabitants or so and whenever I came for a visit several households made me eat tons of delicious fish and goat dishes 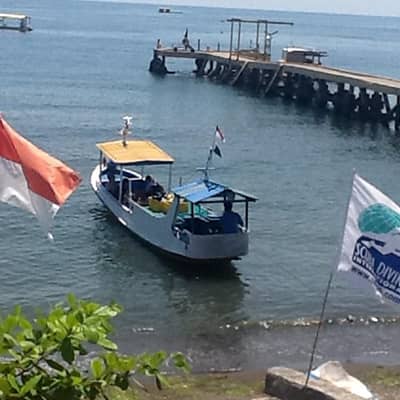 is the only one of our boats that had really been used for fishing before we bought it. And what kind of fishing! Its owner was stupid enough to use dynamite some 10 years after the ban. He was caught and sent to jail. As he needed some serious cash to settle the bail he sold me his boat. Which I luckily took, obviously not only to prevent him from dynamite fishing in the future.
Unfortunately the guys didin’t tell me about that seawater-valve to fill the fishtanks inside. It had only been closed with a flip flop sandal – which fell out and the boat sank within a week of purchase. We had to retrieve it and overhaul the machine, before closing the hole for good. I you know the film “Operation Petticoat” with Cary Grant and Tony Curtis, you will understand why I had to chose the name Sea Tiger. Still being reluctant to paint it pink though.